All regions contributed to the growth, driving local strategy implementation with strong initiatives. In the new Americas region, Honduras became the 101st national subsidiary to be founded by Sika. 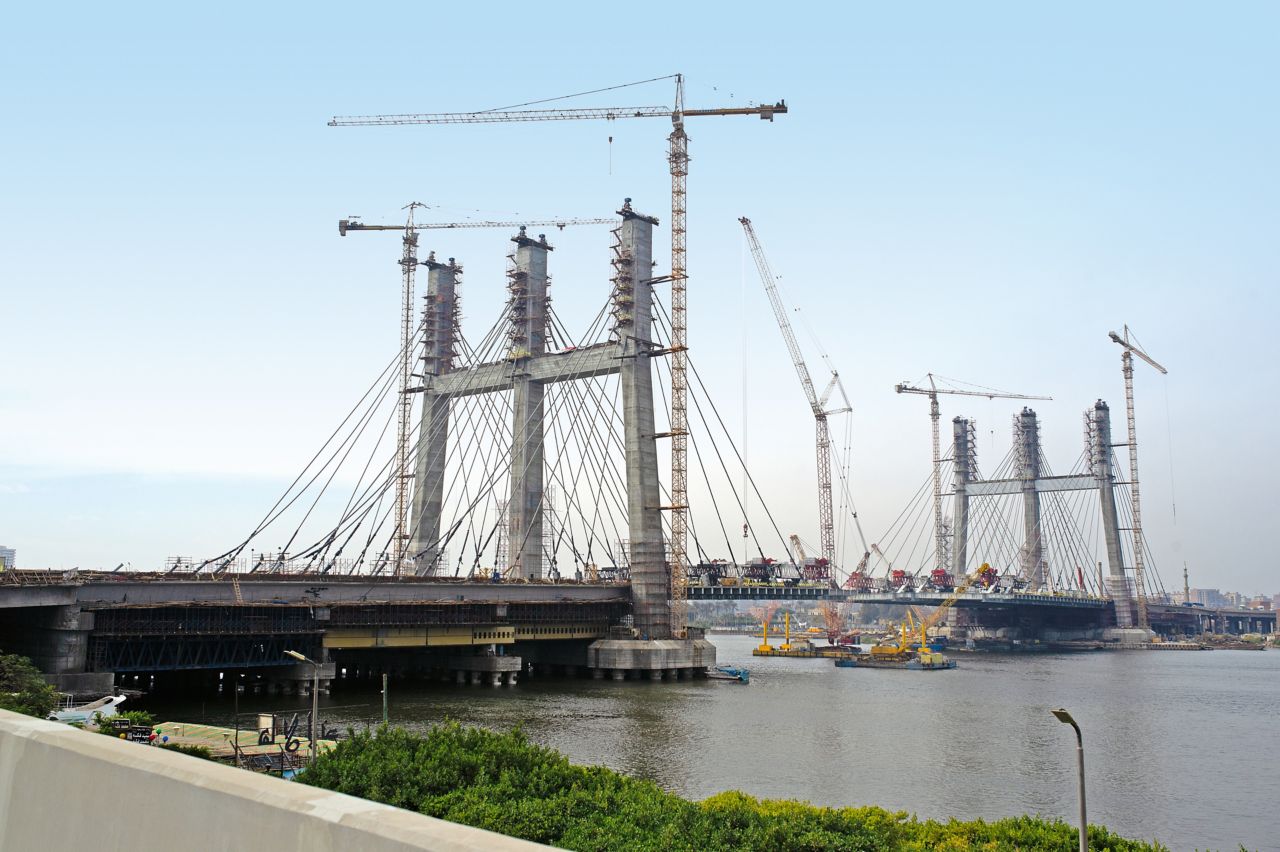 Image: In the construction of the Rod-Al-Farag bridge in Cairo, Sikagard®-550 W Elastic system is being used to protect 600,000 m² of concrete from carbonation as well as Sikacrete®-114 free flowing micro-concrete grouting. Upon completion the bridge will be comprised of six lanes in each direction as well as two lanes for buses and a metro line.

Construction markets in the eurozone countries continued their solid performance on the back of growth in gross domestic product of around 2%, while persistently low interest rates and associated high levels of investment in residential and infrastructure projects had a positive impact. Above-average construction activity was seen in the growth markets of Eastern Europe and Africa in particular. A further rise in raw material prices made for a challenging market environment. Of the five biggest European construction markets – Germany, France, the UK, Italy, and Spain – the UK was as yet the only one to equal pre-2007 levels of construction.

In 2018, Sika’s sales in the EMEA region (Europe, Middle East, Africa) were up by 14.1% in local currencies (previous year: 7.5%). The core markets of Spain and the UK recorded high single-digit growth, while double-digit rates were achieved in Eastern Europe. In particular, the recently founded national subsidiaries contributed to double-digit growth in Africa. All Sika’s target markets contributed to the good result with high single-digit rates of organic growth. 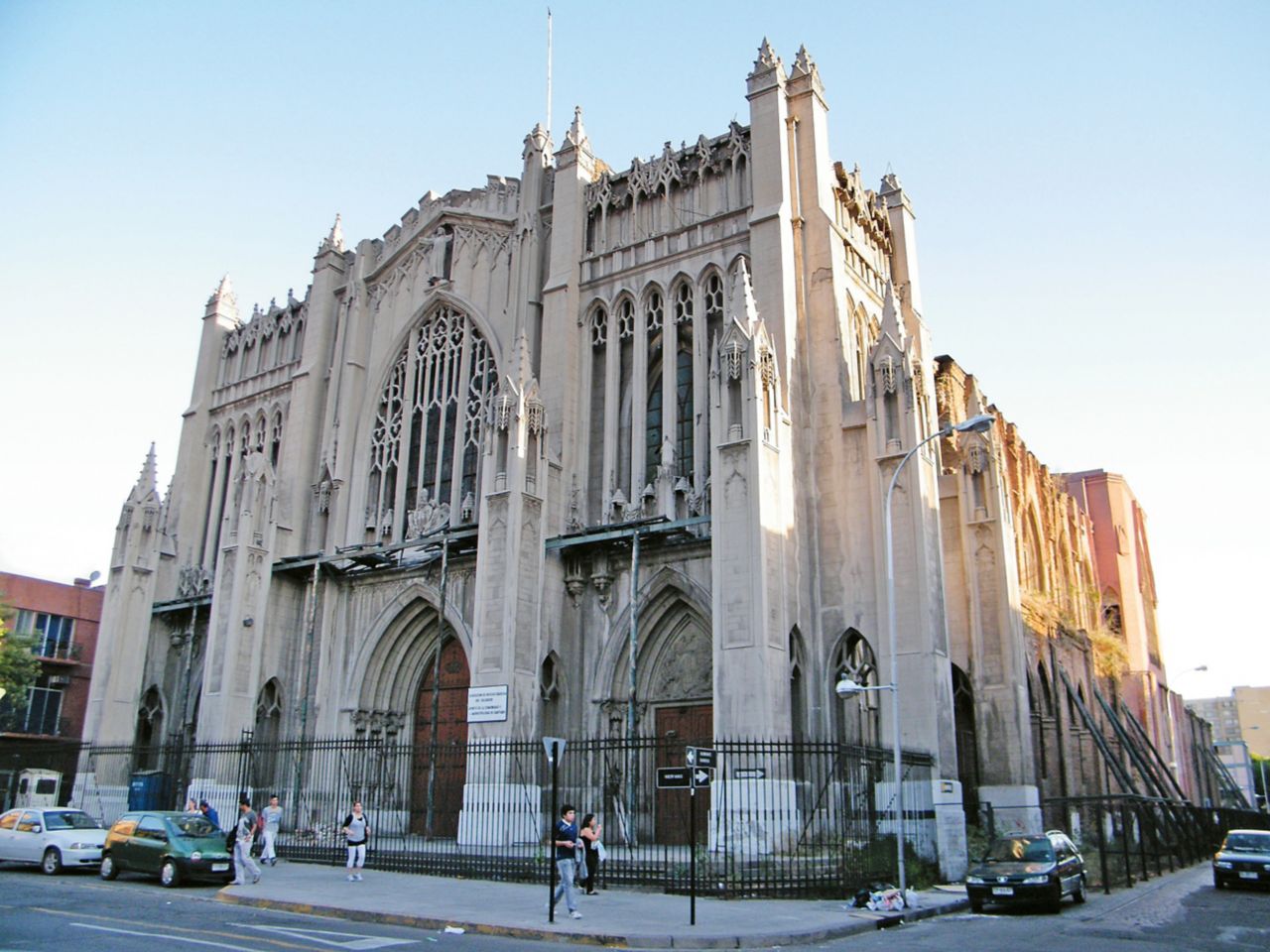 Image: The historical basilica “La Basilica del Salvador” in Santiago de Chile built in 1874 was refurbished using Sikadur®-31, SikaWrap®-300, and Sikadur®-330. The basilica has a ceiling height of 30 meters and can hold up to 5,000 people.

The North American construction markets grew by 3% in 2018. There were high levels of investment in repair and refurbishment projects, as well as in commercial construction projects. Spending on infrastructure projects was low. High inflation and currency fluctuations impacted the markets in Latin America. Furthermore, presidential elections in Brazil, Mexico, and Colombia unsettled the markets. Raw material prices rose sharply throughout the region during the year. Moreover, the higher wage costs resulting from labor shortages and the uncertainty stemming from the trade dispute with China had an adverse impact on the North American economy.

In 2018, sales growth in the newly set up Americas region amounted to 11.7% (previous year: 12.6%). Investment in the country’s rapidly growing metropolitan areas was the driving force behind double-digit growth in the United States. Business performance in Brazil and Colombia was higher than average. The organizational amalgamation of the formerly separate North America and Latin America regions to form the larger Americas region resulted in improvements through various new initiatives in procurement, innovation, talent development, and operations.

The foundation for further growth in Central America was laid with the establishment of a new national subsidiary in Honduras. The acquisition of Propex Holding LLC’s worldwide concrete reinforcing fiber business marks a further investment by Sika in this fast-growing market. Concrete admixture and mortar factories were opened in Peru and Guatemala. 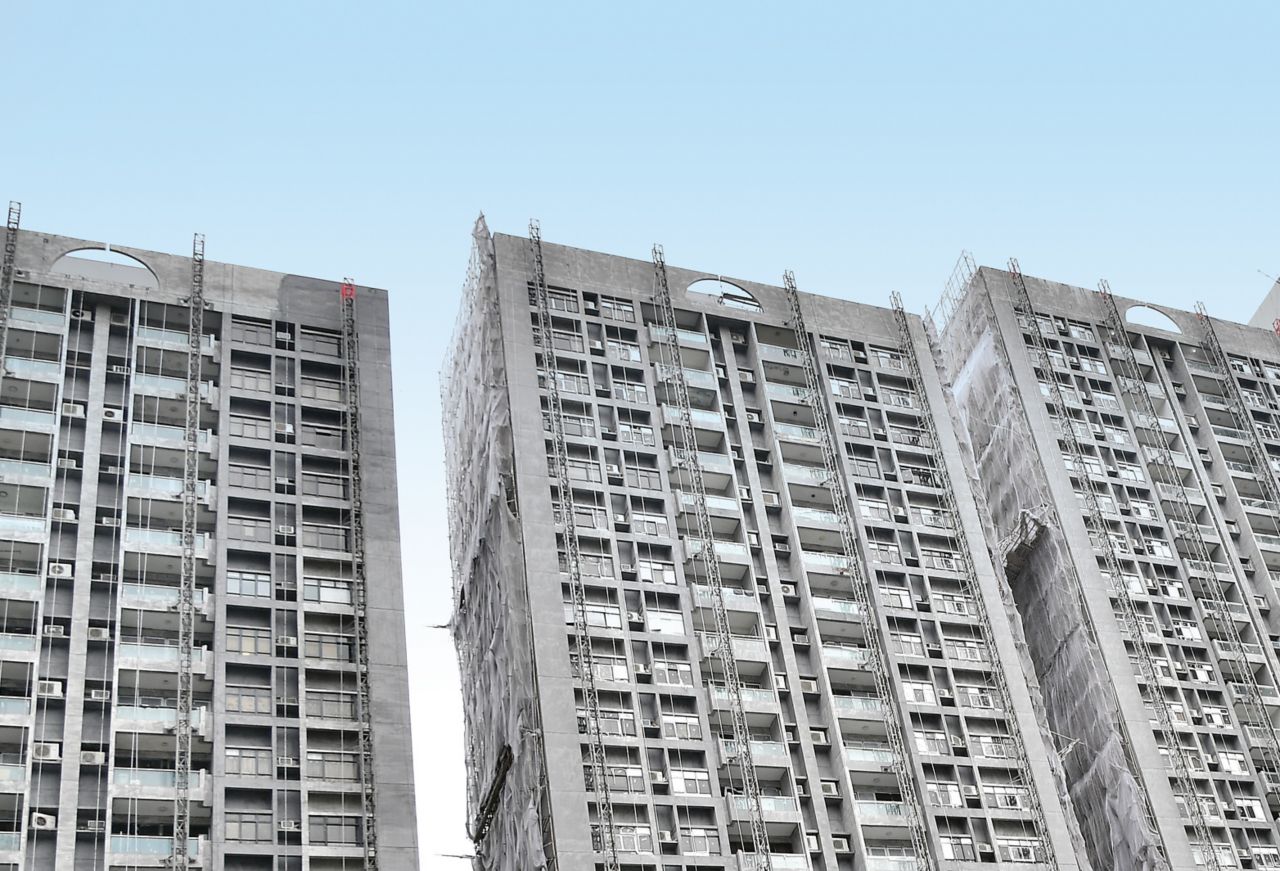 Image: Sika is supporting the facade refurbishment of 19 blocks of high-rise buildings in Hong Kong by providing sealing, bonding, and waterproofing systems. In many large cities there is a great need for repair and maintenance of buildings and infrastructures. Renovation of building envelopes improves energy efficiency, durability, and safety.

Large-scale infrastructure projects continue to stimulate the construction industry in most countries in the region. In China in particular, persistently low interest rates and a solid level of investment in construction led to the implementation of a large number of infrastructure projects. China’s trade dispute with the United States and intensified checks on capital good production by the environmental authorities had a dampening effect on the country’s gross domestic product. Most Southeast Asian countries with the exception of Singapore and Thailand saw gross domestic product grow by more than 5%. Consequently, a large number of infrastructure upgrade projects were initiated.

Sika’s sales in the Asia/Pacific region rose by 5.5% (previous year: 5.4%). The region’s organic growth during the fourth quarter of 2018 reached 7.5%, the highest quarterly figure for the past three years. India, Indonesia, and China recorded the strongest growth rates. The national subsidiary established by Sika in Bangladesh in 2017 has already made a name for itself as a leading supplier of high-performance system solutions in major infrastructure projects such as expressways, railway lines, and energy supply facilities.

Alongside the existing production of concrete admixtures, an ultramodern mortar product manufacturing facility came on stream at the Vietnamese factory in Bac Ninh. This has enabled Sika to expand its supply chain in Vietnam’s large construction market. 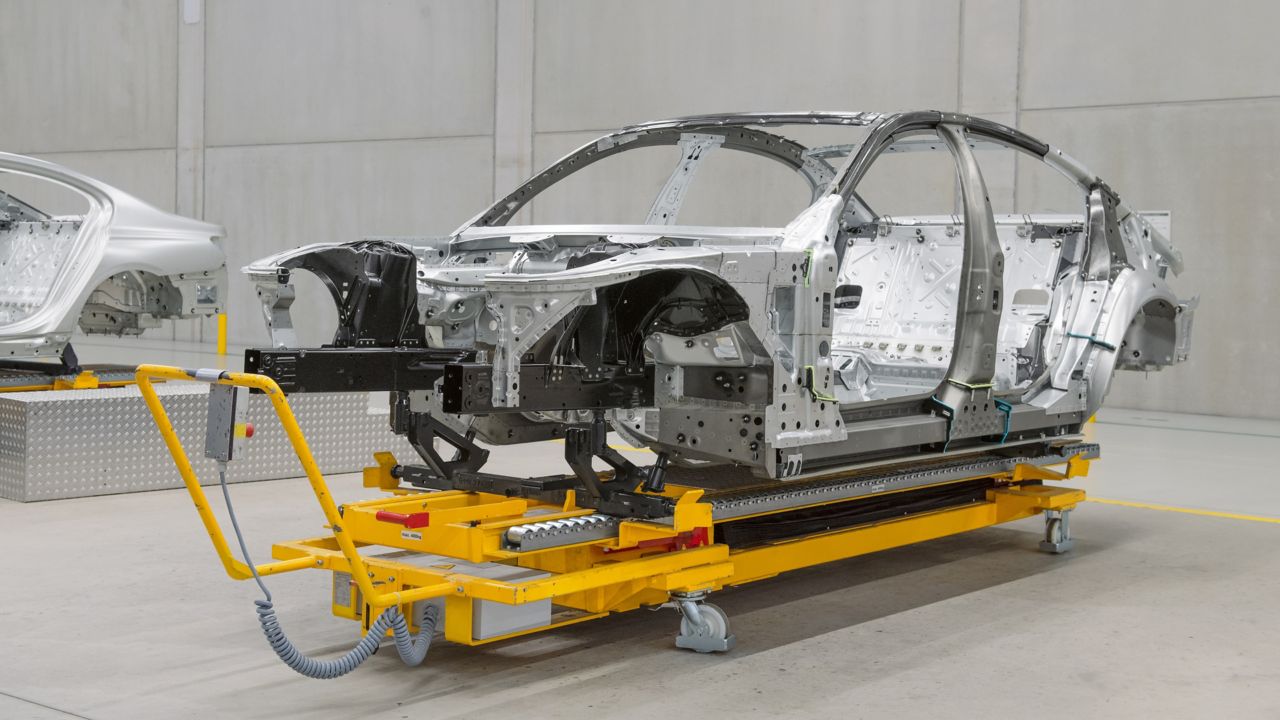 Image: Today’s car manufacturers use many different materials to make vehicles lighter and reduce fuel consumption. Traditional joining methods such as welding are being increasingly replaced by adhesive bonding in multimaterial design. Sika is a long-standing partner of various car manufacturers, and its product technologies are to be found in many new models.

Compared with 2017, there was a slight decline of 0.5% in the number of new vehicles sold in 2018. Automotive sales in the major markets of Europe, the United States, China, and Brazil all fell more sharply than forecast, particularly in the second half of the year, owing to factors such as economic uncertainty, new drive systems, and changes in test procedures. Electromobility is gaining ground, and the technology was the main source of impetus behind drive systems once again in 2018. Virtually all automotive manufacturers are investing heavily in developing electric vehicles and expect to bring new platforms to market over the next few years. Unsettled by announcements of bans on diesel vehicles in European large cities and erroneous fuel consumption estimates for new cars, many consumers have postponed the purchase of a new vehicle for the time being.

Sika’s growth in the new Global Business segment was 29.2% (previous year: 11.5%), of which 23.1% is attributable to the acquisition of Faist ChemTec. The segment comprises the globally managed Automotive business plus Advanced Resins (formerly Axson Technologies) and Faist ChemTec, both established suppliers of components and solutions to the automotive sector and other industries. Overall, Sika continued to gain market share in the automotive sector in 2018, while projects in hand for 2019 reached new record levels. Sika’s product technologies for lightweight construction and electromobility are among those that harbor strong growth potential, alongside its comprehensive acoustic solutions for modern vehicle construction. Sika is set to benefit substantially from the megatrend toward electromobility and aims to increase its sales per vehicle by 20% compared to the content in conventionally powered cars.

In order to derive even greater benefit from the fast-growing Mexican automotive market, Sika opened a new acoustic system and body reinforcement factory in Querétaro.

Innovation has a long-standing tradition within Sika and “courage for innovation” is one of the corporate values. Sika maintains exclusivity over its innovative products through the systematic registration of its intellectual property rights. 133 new inventions were reported in 2018 (previous year: 112) and 85 new patent applications were filed (previous year: 81). By the end of 2018, Sika’s patent portfolio included more than 800 unique patent families with more than 3,400 single national patents. Total expenditure on research and development for the Group in the year under review totaled CHF 189.5 million (previous year: CHF 184.6 million), equivalent to 2.7% of sales.

The research and development of new products, systems, technologies, applications and production processes form the basis of Sika’s innovations. Its research activities are carried out by more than 900 employees at 20 global technology centers. 44 local and 20 regional research and development facilities are globally aligned to Sika Technology AG. Sika Technology targets the development of proprietary technology that provides key performance benefits and allows Sika’s product platforms to respond to global trends such as resource-saving building methods, energy-efficient and low-emission construction materials, high-speed manufacturing methods, or lighter and safer vehicles.