All Regions with Double-Digit Sales Growth in Third Quarter

Sika CEO Jan Jenisch: “We achieved further strong growth in the third quarter and, despite challenging market conditions worldwide, increased sales by over 11% and posted an above-average rise in net profit. We are on track to realize the targets set under Strategy 2018. Our success is based on the accelerated expansion of growth markets, our investments in new factories, acquisitions and new product launches, coupled with the achievements and know-how of our employees.”

In the first nine months of the business year, sales increased by 15.8%. All regions contributed to the sales growth. The currency effect had a negative impact of 6.2%. Adjusted to Swiss francs, sales were 9.6% higher.

Sales in the region EMEA (Europe, Middle East, Africa) saw a 17.4% increase in the first nine months of the year. Visible growth drivers in the Middle East and Africa and the moderate recovery seen in the southern European markets had a positive impact on the region’s development. In addition, the acquisitions made in 2013 and product roll-outs contributed to the strong growth.

North America recorded an 8.5% increase in sales. Projects delayed at the beginning of the year due to the harsh winter are now under construction and investments are being made in infrastructure projects and commercial buildings.

The region Asia/Pacific grew by 15.6%. China, Japan, Southeast Asia and Australia showed double-digit growth. This positive performance is being driven by gains in market share, entry into new markets, the launch of new products, and newly opened factories.

The accelerated expansion of emerging markets continued in the first nine months. New factories were commissioned in Brazil, Indonesia, India and Serbia. In the US, a production facility for concrete admixtures and an additional mortar plant were built.

Three companies with combined annualized sales of CHF 53 million were acquired in the first nine months: Lwart Química, a leading supplier of waterproofing systems in Brazil, a company producing flooring and coatings in South Korea, and Klebag, a manufacturer of adhesives for the interior finishing market in Switzerland.

Through further investments in growth markets, the launch of new products, and the recently acquired companies, Sika is set to continue its growth strategy in the current year. Currency movements, volatile conditions in many markets, as well as one-off positive effects reported in the previous year, present a challenge for the fourth quarter. Sika is projecting 9% to 11% sales growth in local currencies and an 8% to 12% increase in EBIT for 2014 as a whole. 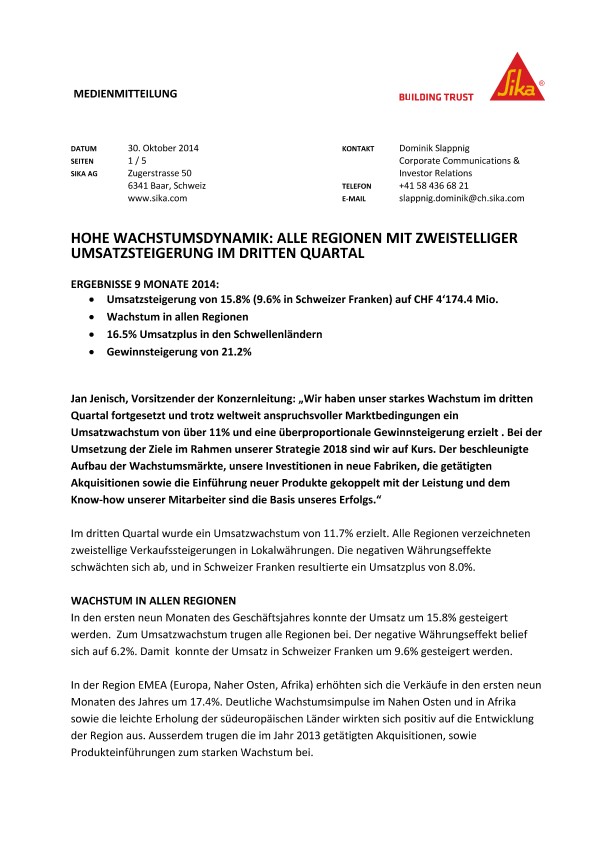