"The new Strategy 2018 is delivering positive results and we can record an excellent business performance for the first three months 2014," said Jan Jenisch, Chief Executive Officer. "Accelerated expansion in the growth markets, our investments in new factories, the acquisitions we have made and the new product launches have all had a substantial impact on Sika's growth in the first quarter."

All Group regions contributed to the significant 23.3% increase in sales in the first quarter of 2014, which was the fourth successive quarter with higher sales growth. Despite a negative currency effect of 7.7%, turnover grew by 15.6% in Swiss francs.

Sika achieved sales growth of 31.0% in the region EMEA (Europe, Middle East and Africa). A slight upturn in construction activity in Europe, which was also felt in the crisis-hit countries of southern Europe, contributed to this growth, as did the acquisitions made in 2013. Furthermore, new product launches and the mild winter had a positive effect on first-quarter business. In the region North America, the construction markets developed positively and sales rose by 5.8%.

The accelerated expansion in the emerging markets is producing compelling results. The region Asia/Pacific grew by 22.5%. In particular, China and the countries of South East Asia generated double-digit growth.

Sales continued to develop at a high level in the region Latin America, rising by 17.1%. However, the devaluation of a number of local currencies, which was severe in some cases, resulted in high exchange rate losses.

The Group confirms its 2014 growth target of 6% to 8% at constant exchange rates, which is in line with the new Strategy 2018. Through further investments in growth markets, the launch of new products, and the acquired companies, Sika will continue to pursue its growth strategy this year. The strong currency movements and framework conditions prevailing in some markets will remain a challenge during the current financial year.

Net Sales in the first three months of 2014 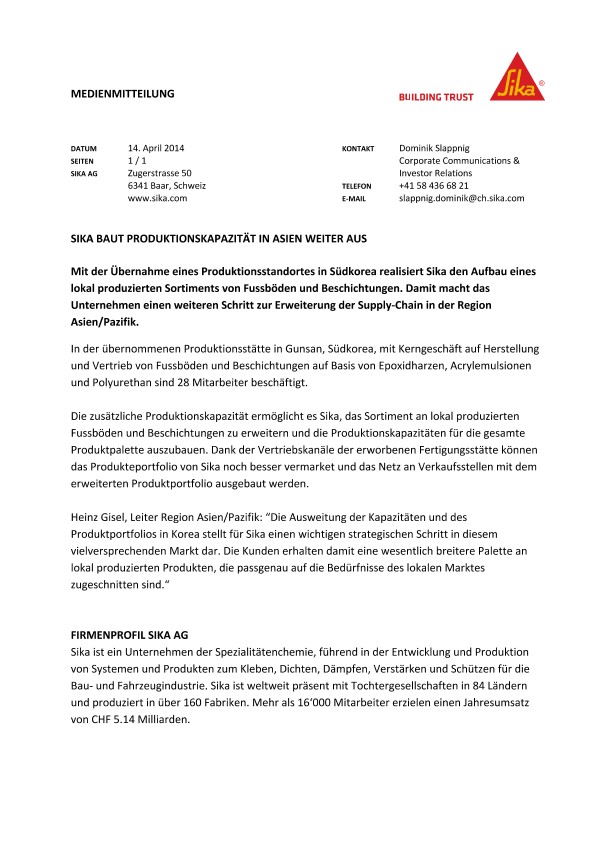