June 1 marks the official inauguration of the world's longest rail tunnel. Sika's front-line technologies and construction expertise played a crucial role in the successful completion of one of Europe's most important infrastructure projects. The immensely challenging quality requirements were met through the use of Sika's durable solutions for waterproofing, fire protection, coatings, and concrete and shotcrete production.

The 57 km-long Gotthard base tunnel in Switzerland is both a novelty and a remarkable  achievement in tunnel engineering. It is the longest rail tunnel in the world and passes through one of the highest Alpine massifs. It runs some 2,000 meters below the mountain summits and, even at its highest point, is still only around 550 meters above sea level. The new rail section will reduce the time that massive freight and modern high-speed trains need to travel from Zurich to Milan by around one hour.

The client specified an extremely long service life, during which time the concrete and waterproofing systems should require no significant maintenance. In the course of an elaborate prequalification process, Sika entirely fulfilled all the stringent requirements. The partly newly developed products underwent rigorous practical tests by official testing laboratories prior to mass production and application.

The high-grade shotcrete used to support the tunnel excavation served as the base for the Sikaplan® and Sarnafil® waterproof membranes. The concrete lining was then placed using Sika admixtures so as to achieve the high degree of precision required for the tunnel surface geometry.

A record breaker for Sika

For Sika too, the Gotthard project defies all superlatives. Since the start of preliminary testing in 1992, Sika's employees have worked more than 210,000 hours on the once-in-a-lifetime project.

Approximately 20,000 tonnes of concrete admixtures were used for the concreting works. The tunnel was waterproofed with 3.3 million m² of Sikaplan® membranes – roughly the size of 330 soccer pitches. Overall, some 40,000 tonnes of Sika products, equivalent to 1,700 freight wagons, were transported to the site. 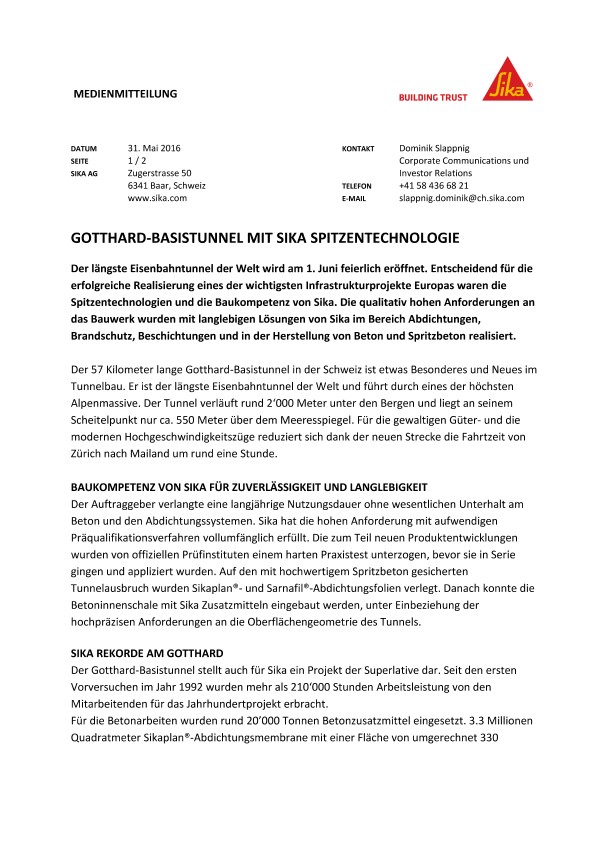