▪ Sales growth of 13.9% in local currencies to CHF 3,470.1 million (+15.9% in CHF)
▪ EBIT increase of 10.6% to CHF 444.6 million
▪ Without one-off costs (related to resolution of dispute with SGO) increase in EBIT would have been disproportionately high at more than 16%
▪ Growth in all regions
▪ Opening of three new factories, establishment of another national subsidiary, and acquisition of Index
▪ Sales target of CHF 7 billion in 2018

After a historic three-and-a-half year takeover battle between Sika and Saint-Gobain, an agreement was reached in May 2018. The signing of the agreement ends the disputes of all parties involved and marks the beginning of a new chapter in the Sika success story.

In the first half of the year Sika recorded strong double-digit sales growth, posting a new sales record of CHF 3,470.1 million. This equates to an increase of 13.9% in local currencies. A positive currency effect (2.0%) led to sales growth in Swiss francs of 15.9%. Growth in the second quarter amounted to as much as 16.3% (19.3% in CHF).

"With a significant sales increase of 15.9% in CHF and growth in net profit of 11.4%, we can look back on a very successful first half of 2018, in which we benefited from the potential of global construction markets through further initiatives. We posted double-digit growth rates in the Middle East, Africa, Eastern Europe, North America, Argentina, and in the automotive business, and have grown much faster than the market in many countries. Given the positive development of business in the first half of 2018, the establishment of a further national subsidiary, and the commissioning of three new factories, we are continuing to implement our 2020 strategic targets in a consistent way, and will exceed the CHF 7 billion sales mark in 2018 for the first time ever." Paul Schuler, CEO of Sika

In the EMEA region (Europe, Middle East, Africa) sales increased by 13.6% in local currencies (previous year: 7.4%). The major EU countries with the core markets of Spain and the UK exhibited high single-digit growth. Double-digit growth rates were recorded in the Middle East, Africa, and Eastern Europe. With the takeover of Index Construction Systems and Products, Sika acquired a leading manufacturer of roofing and waterproofing systems headquartered close to Verona, Italy. By acquiring Index, Sika will extend its product range and further strengthen its position in the Italian market. Production capacity was increased in both Senegal and Saudi Arabia through the commissioning of new factories for concrete admixtures.

The newly established Americas region recorded growth of 13.6% (previous year: 11.7%). The US was able to post doubledigit growth thanks to strong demand in key target markets. After a long, harsh winter, Canada is back on a growth trajectory. Mexico and Argentina once again enjoyed above-average growth. The basis for further growth in Central America was laid with the establishment of a new national subsidiary in Honduras.

Growth in the Asia/Pacific region amounted to 5.0% (previous year: 4.2%). The highest growth rates were recorded by India and China. In Vietnam, a state-of-the-art facility for mortar production has come on stream in the Bac Ninh plant alongside the existing production of concrete admixtures. This will enable Sika to continue to grow in this country’s boomingconstruction market.

The new Global Business segment recorded a growth rate of 28.5% (previous year: 9.2%), with 20.7% attributable to the acquisition of Faist ChemTec. This new segment includes the globally managed automotive business as well as the two acquisitions Axson Technologies and Faist ChemTec – which are both established providers of components and solutions for the automotive area and other applications, and are likewise centrally managed.

The strong first half of the year supports the target for the full 2018 year – namely an increase in sales of more than 10% to reach CHF 7 billion for the first time. Volatile, rising raw material prices continue to pose a challenge. For the year as a whole, EBIT and net profit should increase at a slightly higher rate than sales. The growth strategy will be continued in 2018 with the opening of eight new factories and the founding of more national subsidiaries. Furthermore, additional acquisitions will be targeted in the heavily fragmented construction chemicals market.

1 Due to the share split, the earnings per share as of June 30, 2017, were adjusted for comparability. Our calculation took this into account with 1/60 of the earnings per share as of June 30, 2017.
2 Dilutive effect due to convertible bonds issued.
3 As of December 31, 2017/June 30, 2018.
4 Shareholders’ equity divided by balance sheet total.
5 Capital employed = current assets, PPE, intangible assets less cash and cash equivalents, current securities, current liabilities (excluding bank loans and bond). 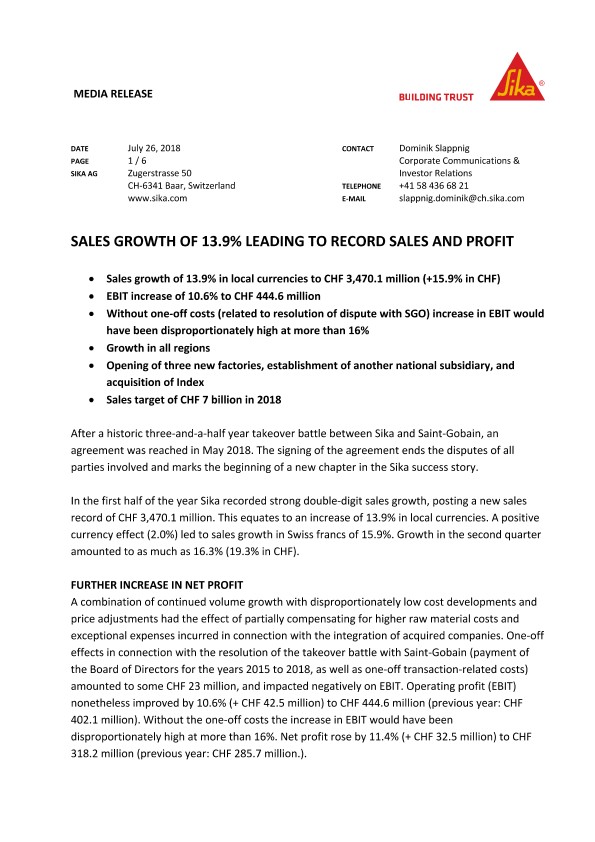 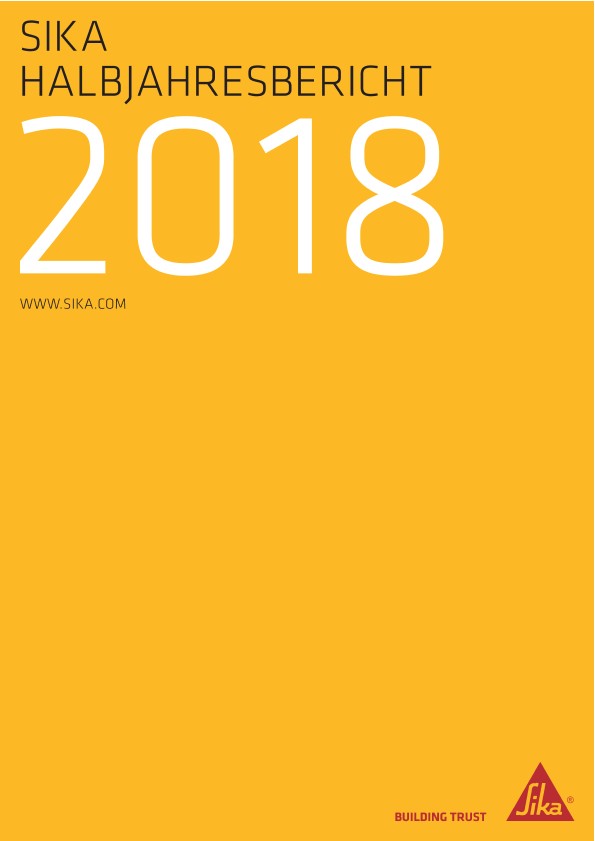