▪ Sales growth of 15.1% in local currencies to over CHF 6 billion (+12.9% in CHF)
▪ Growth in all regions
▪ Organic growth of 4.1%
▪ Strong operating profit growth (EBITDA +18.2%, EBIT +10.6%)
▪ Strong cash-flow generation, operating free cash-flow of CHF 555.1 million
▪ Boost to growth thanks to acquisition of Parex as well as of Crevo-Hengxin, King Packaged Materials and Belineco
▪ Opening of five new factories
▪ Outlook: sales of over CHF 8 billion and double-digit EBIT growth for 2019
▪ New Strategy 2023 will ensure Sika’s success in the upcoming years

Sika demonstrated impressive performance in the first nine months of 2019, recording high growth and a new sales record of CHF 6,007.3 million. This equates to an increase of 15.1% in local currencies, whereby the acquisition effect accounted for 11.0% and organic growth 4.1%. Sales growth in CHF amounted to 12.9% (-2.2% currency effect).

Dial-in details and replay available under the following link.

"Following strong sales growth of 15.1% and a solid organic growth in the third quarter, we are confident that we will exceed our sales target for fiscal 2019 of CHF 8 billion. Particularly pleasing is the strong operating free cash-flow that we were able to achieve in the first nine months. The integration of Parex and the realization of our shared business potential is proceeding very successfully and at a good pace. Thanks to our recently announced Strategy 2023 we are pointing our already powerful organization to the next level, and will be implementing further initiatives to drive growth momentum, sustainability, and operational efficiency." Paul Schuler, Chief Executive Officer

In the first nine months of the year, Sika was able to increase its gross margin to 53.5% (previous year: 53.3%). At EBITDA level, profit increased by 18.2% (CHF 1,039.8 million; previous year: CHF 880.0 million) which can mainly be attributed to the initial adoption of the new leases standard. Operating profit (EBIT) improved by 10.6% to a new record level of CHF 805.9 million (previous year: CHF 728.9 million). This figure includes the one-off effects booked in connection with the acquisition and integration of Parex, which amounted to CHF 38.5 million. In the operating profit figure for the prior-year period, one-off effects in connection with the solution to the takeover dispute with Saint-Gobain amounted to CHF 23 million. Excluding one-off and acquisitions effects in 2019, EBIT growth would have been over-proportional.

The first nine months of the current financial year have been characterized by the fast and successful integration of the Parex business. In more than 20 countries fully integrated management structures are already in place. Initial successes have been delivered with cross-selling activities in connection with the expanded product portfolio and the benefits of combined procurement activities. For example, in China 1,500 “shop-in shops”, with Sika products in Parex point of sales, were launched. The forecast synergies of CHF 80–100 million will therefore end up at the higher end of this bandwidth.

In a challenging market environment, Sika’s growth in all regions was stronger than the market.

The Americas region recorded strong sales growth of 18.1% (previous year: 13.0%). Growth accelerated in North America despite the ongoing shortage of skilled labor in the construction sector. Latin America reported healthy growth. Business development was above-average in Brazil, Colombia, and Peru. In Mexico, the repercussions of the change in government were noticeable in the implementation of infrastructure projects. In Canada, the acquisition of King Packaged Materials in the reporting period brought a market leader in concrete repair systems into the Group.

Growth in the Asia/Pacific region amounted to 31.1% (previous year: 4.8%), a figure that includes the strong acquisition effect of the Parex takeover. The highest growth rates in Asia/Pacific were recorded in the Philippines, in India and in China. In China, Sika took over Crevo-Hengxin, a manufacturer of silicon based sealants and adhesives. The newly acquired range of products opens up cross-selling synergies in the extended distribution channels.

The Global Business segment recorded a growth rate of 3.6% (previous year: 29.9%). Sika generated further growth in the automotive area in the first nine months of the year, despite a significant decline in the production figures of automotive manufacturers around the world. The megatrends in modern automotive construction, which are dominated by electro-mobility and lightweight construction, are opening up new avenues of long-term growth potential for Sika thanks to new, lighter platforms with multi-material designs and new adhesive technologies, as well as heat management in modern battery technologies for electric vehicles.

OUTLOOK FOR 2019: SALES OF OVER CHF 8 BILLION AND DOUBLE-DIGIT EBIT GROWTH

For the 2019 financial year, Sika is expecting an increase in sales to more than CHF 8 billion along with double-digit EBIT growth. The implementation of the Group's growth strategy will continue in 2019 with the opening of between seven and nine new factories. Activities to establish further growth platforms in the form of company acquisitions are continuously being pursued.

Strategy 2023, which was unveiled on October 3, is designed to expand Sika’s growth model and align the organization for continued long-term success and profitable growth. By targeting six key areas – market penetration, innovation, operational efficiency, acquisitions, strong corporate values and sustainability – Sika is seeking to grow by 6–8% a year up to 2023. It is aiming for a higher EBIT margin of 15–18% by 2021. Projects in the areas of operations, logistics, procurement and product formulation should result in annual improvement in operating costs equivalent to 0.5% of sales.

1 Growth in local currencies including acquisitions.

2 Sales contribution by acquired companies without considering the growth after business combination. Sales growth of the acquired businesses since initial consolidation is included in organic growth.

3 Growth adjusted for acquisition and currency impact. Sales growth of the acquired businesses since initial consolidation is included in organic growth. 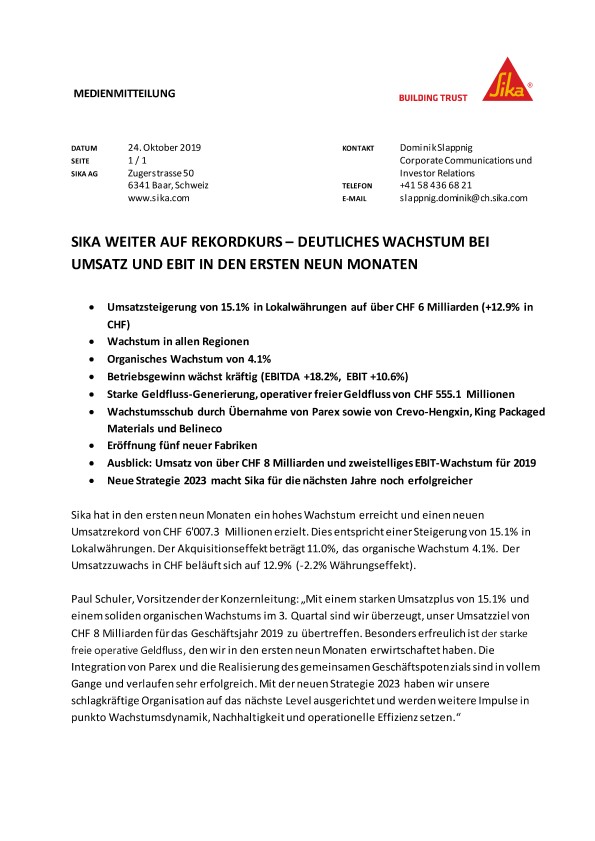 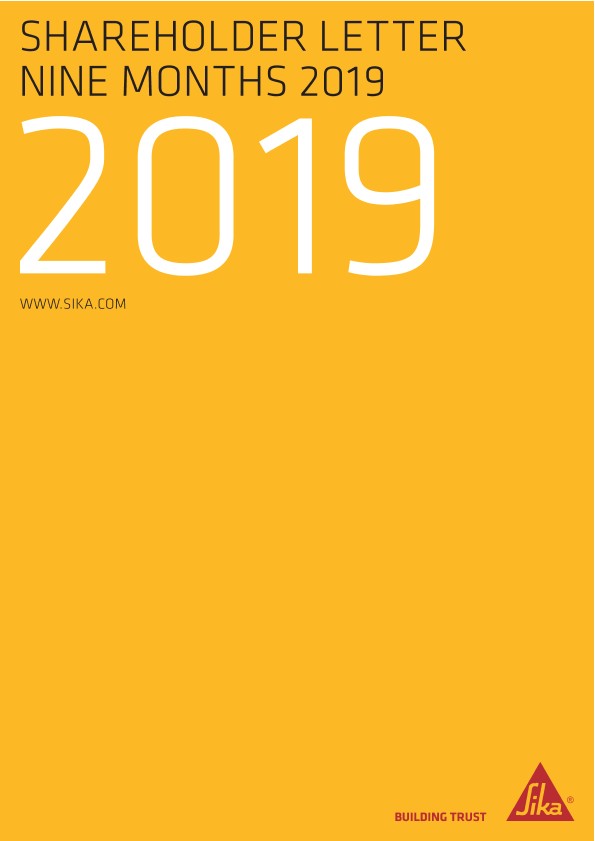