Sika Defies Coronavirus Crisis with Growth in Local Currencies of 2.9%

▪ Sales growth of 2.9% in local currencies to CHF 3,614.6 million (–3.2% in CHF)
▪ High negative currency effect of –6.1% (impact of minus CHF 225 million in sales and CHF 29 million in EBIT)
▪ Maintained high EBITDA margin of over 16% (currency adjusted absolute EBITDA was flat)
▪ Operating profit (EBIT) at CHF 410.2 million (–14.8%)
▪ Increased operating free cash flow amounting to CHF 254.7 million (+41.7%)
▪ Closing of acquisition of Adeplast (Romania), takeover of Modern Waterproofing Group (Egypt), and buildup of a new factory in Barranquilla (Colombia)
▪ Outlook for the second half of the year: Sika is expecting more favorable market conditions. With the anticipated improvement in sales volumes, the company expects an over-proportional EBIT increase for the second half of the year
▪ Confirmation of 2023 strategic targets for sustainable, profitable growth

Despite the substantial impact of the coronavirus pandemic, the company was able to continue its growth trajectory, reporting a sales growth of 2.9% in local currencies to CHF 3,614.6 million for the first half of 2020. A high negative currency effect of –6.1% led to a decline in sales of –3.2% in Swiss francs (which corresponds to around CHF 225 million). Acquisition effect contributed 13.4% to growth. At –10.5%, organic growth was negative in the first half of the year. In March, April, and May, the business was impacted by the ongoing coronavirus pandemic in almost all subsidiaries. In June, Sika recorded a positive organic sales growth for the first time since February, as lockdown measures ended or were significantly relaxed in many countries. Business activities started to normalize, and the dynamics in the construction sector picked up.

"Around 35 of the 100 countries Sika is present in experienced a full lockdown for about two months in the first half of the year, and the rest of our countries have been strongly impacted by the pandemic. With our local management structure in place, we quickly adapted globally to the changing market conditions in the respective countries. We swiftly implemented the necessary measures to protect our employees, customers, and suppliers, whilst simultaneously maintaining our supply chain and business activities with a focus on consistent cost management. Thanks to our high speed of implementation and the proximity to our customers in all countries, we were able to quickly grasp business opportunities and thus capture further market share. I would like to thank all of our employees worldwide for their great efforts and never losing focus during this challenging time." Paul Schuler, CEO of Sika

The reduced sales volumes in the months March, April, and May had a negative impact on profitability. Nevertheless, the material margin increased to 54.6% (previous year: 53.8%) in the first half of the year. Operating profit before depreciation and amortization (EBITDA) was maintained on a high level with the EBITDA margin reaching 16.4% (previous year: 16.7%). On a currency adjusted basis, absolute EBITDA was flat.

Operating profit (EBIT) amounted to CHF 410.2 million (previous year: CHF 481.7 million) a decline of –14.8%. EBIT was impacted by a negative operating leverage (March to May), initial expenses in connection with structural adjustments and efficiency measures, as well as integration costs in connection with the acquisition of Parex. The negative currency effect of –6.1% further reduced the EBIT by CHF 29 million.

Strong focus on liquidity and cash management resulted in a high operating free cash flow of CHF 254.7 million which exceeded previous year by CHF 75 million. Key drivers of this were an optimized inventory management, a focus on accounts receivables, and reduced capital expenditures.

The EMEA region grew by 3.2% in local currencies in the first half of the year. In June, the region achieved single-digit organic growth after already exhibiting a considerable improvement in May compared to April. The impact of the pandemic was limited in most Central European countries, such as Germany, Austria, Switzerland, Eastern European countries, and Nordic countries. The UK and the Middle East, which still show a very diverse picture, slightly improved in June. In May, Southern Europe showed the biggest improvement versus the previous month, with most lockdown restrictions being eased in Italy, Spain, Portugal, and France, with the latter returning to growth in June. Across the entire EMEA region, direct sales activities can again be supported with customer visits. Digital sales support measures, such as webinars, continue to be used to maintain close contact with customers.

In the first half of the year, the Americas region recorded growth in local currency of 2.6%. Despite higher COVID-19 infection rates in the USA, Mexico, and Brazil, Sika saw an improvement in the Americas region in June. Canada in particular recorded a strong performance with positive organic growth. In the USA, operating profit remained unchanged in June compared to the previous year, with the distribution business even recording double-digit growth in sales. The business in the Americas region was most heavily impacted by the pandemic in May. During this month, many major cities in North America were affected by stringent restrictions and several Latin American countries were in a complete lockdown. In Latin America, the development continues to be uncertain, as most countries are still in a partial or total lockdown, with repeated transitioning between reopening and more restrictive measures.

The Asia/Pacific region reported a growth of 21.8% in local currencies in the first half of the year. Despite numerous extended lockdowns, several key countries were back to growth in June. China in particular recorded double-digit growth and most Target Markets are also back to growth.  The Parex business, with its granular distribution channels, has proven to be quite resilient throughout the crisis. The operating business in Japan is slowly recovering. In parts of Southeast Asia, many countries remained in lockdown for a longer period of time, whereas the situation in Vietnam and Thailand improved more quickly. Australia recorded organic growth in the first half of the year.

Global Business: In the first half of the year, the automotive industry reported a decline of –35% in car build rates. While some signs of improvement are visible in June, it is expected to take some time until the numbers climb back to 2019 levels again. Sika has therefore focused the business on lower capacity requirements and invested in process improvements. Most car manufacturers in China, Europe, and North America halted production for a longer period of time during the first six months of the year, with Chinese manufacturers being the first to restart their operations. From May onwards, car production in China is back on the growth trajectory and incentives are boosting customer demand. For the first half of the year, Global Business posted negative growth in local currencies of –23.1%, therefore developing more favorably than the global automotive sector.

Despite the coronavirus-related forecasted decline in automotive sales, Sika is confident that the megatrends in modern auto manufacturing, such as electromobility and lightweight construction, will help Sika to continue to gain market share and generate profitable, long-term growth.

Despite the coronavirus crisis and its impact on business operations, Sika confirms its strategic targets 2023. The organization will continue to be aligned for sustainable, long-term success and profitable growth. By targeting six strategic pillars – market penetration, innovation, operational efficiency, acquisitions, strong corporate values, and sustainability –, Sika is seeking to grow by 6%–8% a year in local currencies until 2023. It is aiming for a higher EBIT margin of 15%–18% from 2021 onwards. Projects in the areas of operations, logistics, procurement, and product formulation should result in an annual improvement in operating costs equivalent to 0.5% of sales.

In June, Sika has seen a further improving trend in construction markets and sales volumes are steadily returning to normal levels. Global construction activity is gaining momentum thanks to the gradual reopening of construction sites around the world. 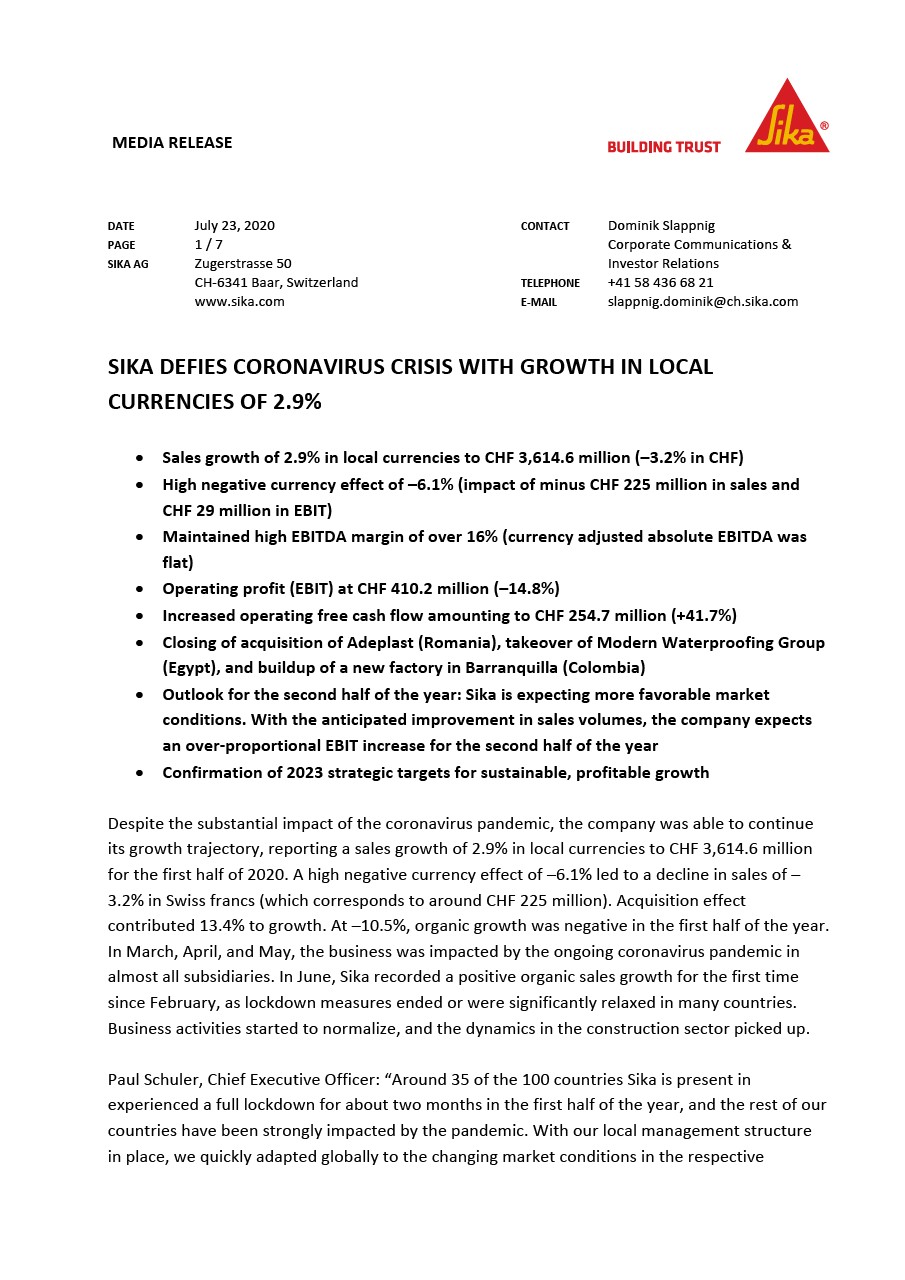 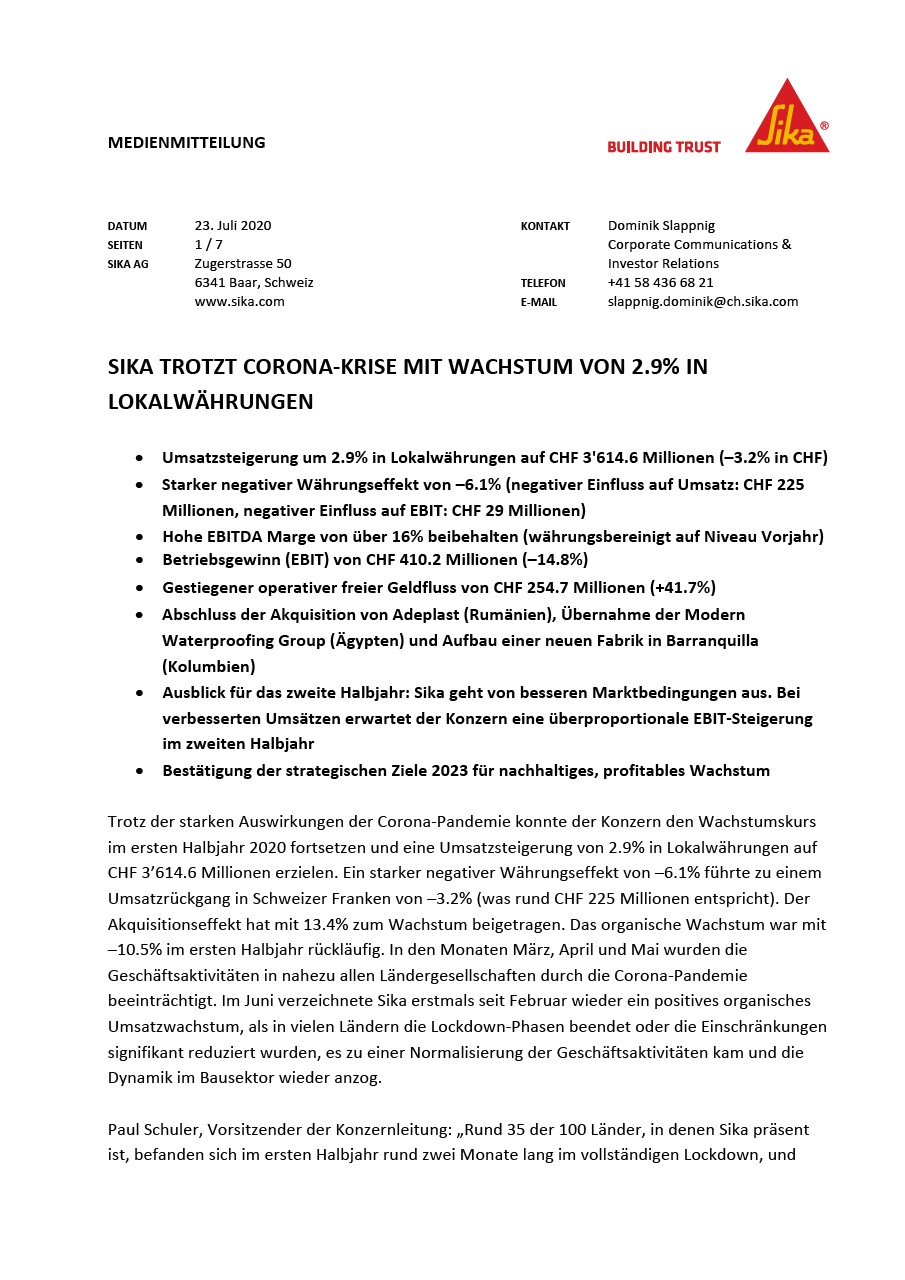