▪ Sales increase of 15.4% in local currencies to CHF 1,813.6 million (+10.3% in CHF)
▪ Negative currency effect of –5.1%
▪ Acquisition of Adeplast (Romania) concluded, new production facility in Sarnen (Switzerland) comes on stream
▪ Outlook for 2020: forecast for 2020 not yet possible due to ongoing developments related to COVID-19
▪ Confirmation of 2023 strategic targets for sustainable, profitable growth

Thanks to a good start to the 2020 business year, Sika has continued its growth trajectory, reporting a new sales record of CHF 1,813.6 million in the first quarter. This equates to an increase of 15.4% in local currencies. A negative currency effect of –5.1% led to sales growth in Swiss francs of 10.3%, with an acquisition effect of 16.7%. Organic growth was thus slightly negative in the first quarter, at –1.3% This reflects the first repercussions on business of the COVID-19 pandemic.

"Since the start of the coronavirus pandemic, Sika has been quick to react in all markets affected, implementing the necessary measures swiftly and rigorously. This has been done with a view to safeguarding the health of employees, maintaining business activity, and adapting to the new market conditions through targeted cost management. The crisis will affect Sika, too, but – thanks to our proximity to customers in all countries – we are able to move fast in order to grasp opportunities and thus capture further market share. I want to thank all of our employees for their great dedication at this difficult time." Paul Schuler, Chief Executive Officer

Slower Growth in March in All Regions

As the coronavirus pandemic gained ground in January 2020, first in China and then in the rest of Asia, followed by the EMEA region and the Americas region, from mid-March around 30 countries where Sika is present through subsidiaries and production sites found themselves in lockdown. The extent of the lockdown varies from country to country. Since the situation is changing constantly, Sika is adapting measures specifically in line with the new circumstances.

In the first quarter of 2020, the EMEA region recorded a sales increase in local currency of 13.3% (previous year: 8.2%). Business developed well in Germany, Austria, and Switzerland (the "DACH"area), the Nordic countries, Eastern Europe, and the Middle East. The impact of the pandemic made itself felt on the entire EMEA region from mid-March, with the first countries entering the lockdown phase. The acquisition of Adeplast (Romania) was concluded at the end of March. In addition, in the first quarter Sika also brought into operation in Sarnen, Switzerland, a new production facility for the manufacture of SikaProof® structural waterproofing membrane.

The Americas region recorded growth in local currencies of 23.0% (previous year: 4.8%). Business was strong in the region until mid-March. The United States and Canada in particular saw double-digit growth rates, and many countries in Latin America recovered from the political tensions of the previous months. However, with the lockdown, growth momentum came to an abrupt halt in several Latin American markets from March 20.

Sales in local currencies in the Asia/Pacific region increased by 29.8% (previous year: 2.8%), a figure which includes a significant acquisition effect from the Parex takeover (39.5%). China, where the COVID-19 outbreak started, was in lockdown from mid-January to March. Sika was able to restart business activities in the country from early March, with all factories recommencing production on a reduced scale. Australia, Japan, and Korea were less affected by the pandemic in economic terms, and construction activity continued in most areas with some restrictions.

The automotive industry reported a decline of -25% in production figures in the first quarter. Despite the difficult environment, Sika was able to capture increased market share. The Global Business segment posted negative growth in local currencies of –7.1% (previous year: 13.3%). Most car manufacturers in Europe and North America halted production from mid-March, just as their Chinese counterparts were restarting their production operations. Despite the coronavirus-related forecasted decline in automotive sales, Sika expects the megatrends in modern auto manufacturing to generate growth stimuli in the long term, with electro-mobility and lightweight construction also dominating in future.

Measures in the Current Situtation

From the outset, the central focus has been the health of employees, customers, and suppliers. Sika was able to react swiftly, with its local management teams developing and implementing targeted operational measures for the national subsidiaries.

Cash management is a key issue. Non-business-critical investment has been postponed and cost structures have been adapted, without jeopardizing long-term growth. Close attention is paid to working capital management. Sika has a solid balance sheet and kicked off the 2020 business year with a high cash holding of CHF 995 million. On top of this, the Group has CHF 1.25 billion in credit lines.

Sika confirms its strategic targets 2023. The organization will continue to be aligned for continued long-term success and profitable growth. By targeting six strategic pillars – market penetration, innovation, operational efficiency, acquisitions, strong corporate values, and sustainability – Sika is seeking to grow by 6‐8% a year in local currencies by 2023. It is aiming for a higher EBIT margin of 15‐18% from 2021 onward. Projects in the areas of operations, logistics, procurement and product formulation should result in an annual improvement in operating costs equivalent to 0.5% of sales.

Given the volatility of the current backdrop, it is not possible to issue any concrete forecast as regards the course of business for full-year 2020. Much will depend on when individual large countries exit lockdown and how the further spread of the virus can be contained over the year. Although Sika will not be able to escape a global recession entirely unscathed, it is convinced that it will be able to continue to further improve its position thanks to the measures taken and its proximity to the market, emerging from the current situation strengthened as a company.

Net Sales in the First Three Months of 2020

A telephone conference will take place today in connection with publication of the first quarter results. Please dial in 10 to 15 minutes prior to the start of the event.

An operator will then connect you with Paul Schuler (CEO), Adrian Widmer (CFO), and Dominik Slappnig (Head of Corporate Communications & IR).

You will also be able to find a recording of the telephone conference on the Sika website, in the "Investors" section. 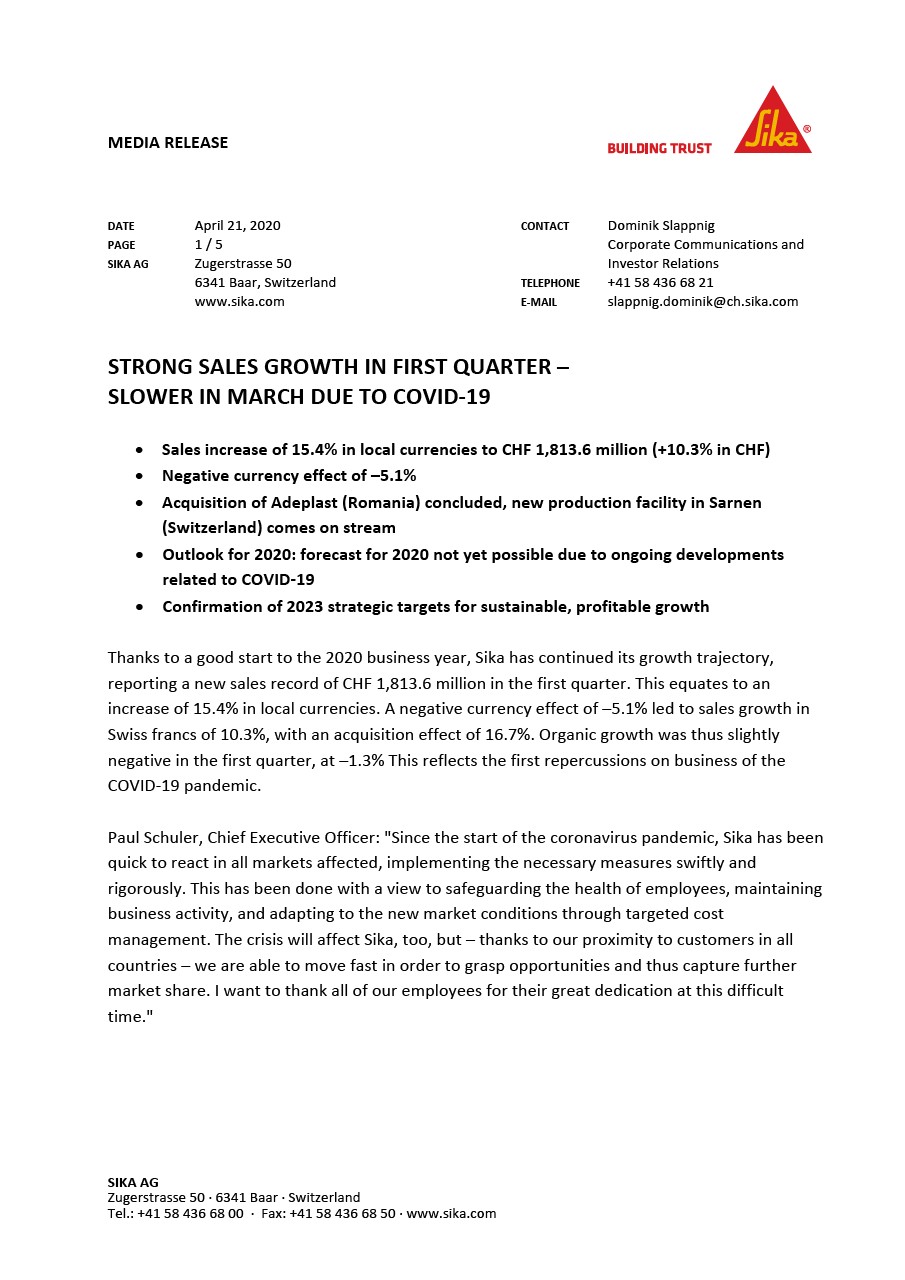