Despite a long winter, Sika managed to maintain sales in local currencies at the previous year’s level (-0.2%) in the first quarter of 2013. As exchange rate shifts had a negative impact of -0.9%, sales in Swiss francs reached CHF 1 043 million.

After a good start to the year, a record cold March put the brakes on a large number of construction projects in Europe and North America. External applications such as roof coverings, façade engineering, and renovation and refurbishment work were delayed. As a result, sales performance in regions EMEA and North America as measured in local currency was -4.5% and -4.6% respectively.

Business in the emerging markets continues to develop positively, with sales up 9.6%. In the region Asia/Pacific, there was a 7.8% increase in local currencies. China is back on a growth trajectory, and double-digit growth was again reported for the markets in Southeast Asia, which include Indonesia, Thailand and Vietnam. The region Latin America achieved growth in local currencies of 6.2%. Sika posted double-digit growth in most markets, except in Colombia and Mexico, which experienced a downturn.

For the current year, Sika assumes that the construction projects held up by the wintry weather will get back on track and be brought to completion. Sika affirms the growth targets of 4% to 6% in local currencies it announced for 2013.

Net Sales in the first three months of 2013 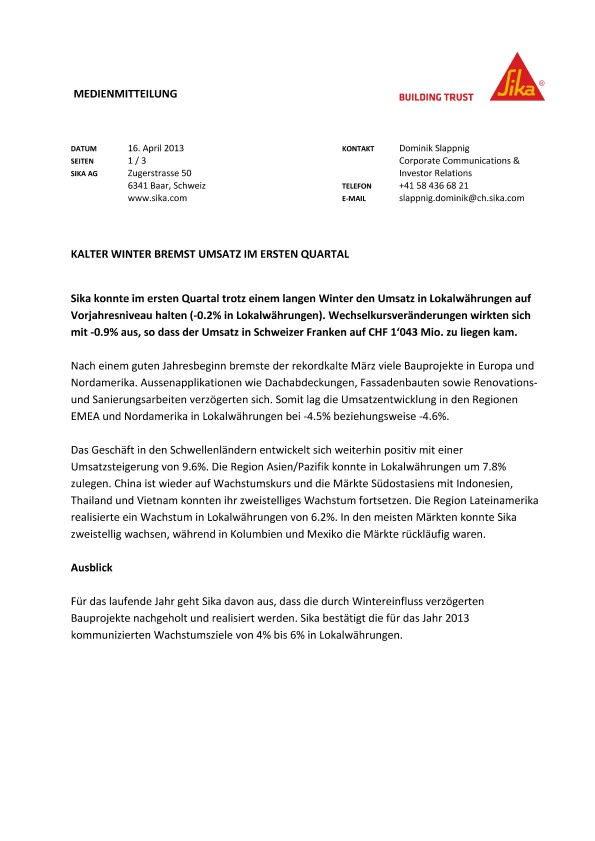