The redeveloped harbor area  in Hamburg has become a magnificent new landmark for the Hanseatic city of northern Germany since completion. The Elbphilharmonie concert hall is an architectural and cultural beacon that shines far beyond Hamburg’s city limits.

The first step involved stripping back the existing warehouse to its historic landmark brick facade. To carry the total weight of the Elbphilharmonie, almost 200,000 tons, the warehouse foundations needed strengthening by adding 650 more reinforced- concrete piles to the 1,000-plus existing piles. The warehouse levels now accommodate parking areas and several restaurants as well as rehearsal and storage spaces for the concert hall. Forming the interface between a restored warehouse and new-build component is the approx. 3,100m² plaza, which offers a stunning 360° panorama. This public viewing deck is accessed via an extraordinary, 82 m-long escalator, which leads from the eastern entrance portal through the entire building to the western front, where it reaches a height of 37 m. The journey through the white, illuminated tunnel vault is, in itself, a remarkable experience.

The spacious plaza foyer is dominated by large ceiling vaults and inclined concrete columns. To optimize concrete strength and durability, Sika supplied a total of 40 tons of ultra-fine pozzolanic concrete additive Sika® Silicoll SL. The most stringent (class 4) requirements were placed on the fair-faced concrete in the stairwells and elevator shafts. The universal Sika® Viscocrete® ready-mix concrete superplasticizer was specified for many of the complex concreting operations.

Curved sculptural stairways opening off the plaza lead to the centerpiece of the Elbphilharmonie – one of the acoustically best concert auditoria in the world. Required to offer long term abrasion and impact resistance, the steel stair balustrades were provided with a robust anti-corrosive finish using the SikaCor® EG system. The combination of two-pack priming and intermediate coats based on epoxy resin/micaceous iron oxide and polyurethane top coat ensures high chalking resistance and color retention. In the event that the coating initially applied to the balustrade had corroded within a short amount of time, Sika turned up right on time with the ideal solution.

The over 70 m high glass assembly fronting the Elbphilharmonie is reminiscent of a giant, shimmering, blue crystal. Sporting 1,100 window units, the glass facade covers a total area of around 20,500 m². The adhesives and sealants used for the glazing are exposed to the typically harsh Hamburg climate of alternating sunshine, rain, storms and gale-force winds. The project team thus opted for the use of Sikasil® SG-500 two-part structural silicone adhesive and Sikasil® IG-25 HM Plus two-part silicone sealant for fabrication of the individual glass units. In addition to the adhesives and sealants for the glass facade, Sika also supplied sealant solutions for the floor joints in the break rooms and stairwells.

Structurally, the Elbphilharmonie’s column-free grand hall takes the form of an intricate steel frame with steel nodes. The 6,200 m² roof area is made up of eight concave surfaces resting on approximately 1,000 individually bent steel beams. Due to the extremely steep roof angles in some places, the design team opted to use the 2mm thick Sarnafil® TS 77-20 E multi-layer polymeric membrane, based on flexible polyolefin. The individual membrane sheets were mechanically spot-fixed at the overlaps using the Sika® Sarnafast system, purpose-developed for fastening to trapezoidal steel profiles. Special washers were used in conjunction with the Sarnafast SF 4.8 self-drilling, hardened carbon steel fasteners. The roof junctions were formed with Sarnafil® T galvanized-steel flashings. The upper faces of these units are laminated with Sarnafil® TG 66-18 FPO membranes, thereby allowing homogeneous welding with the TS 77-20 E roof membrane. 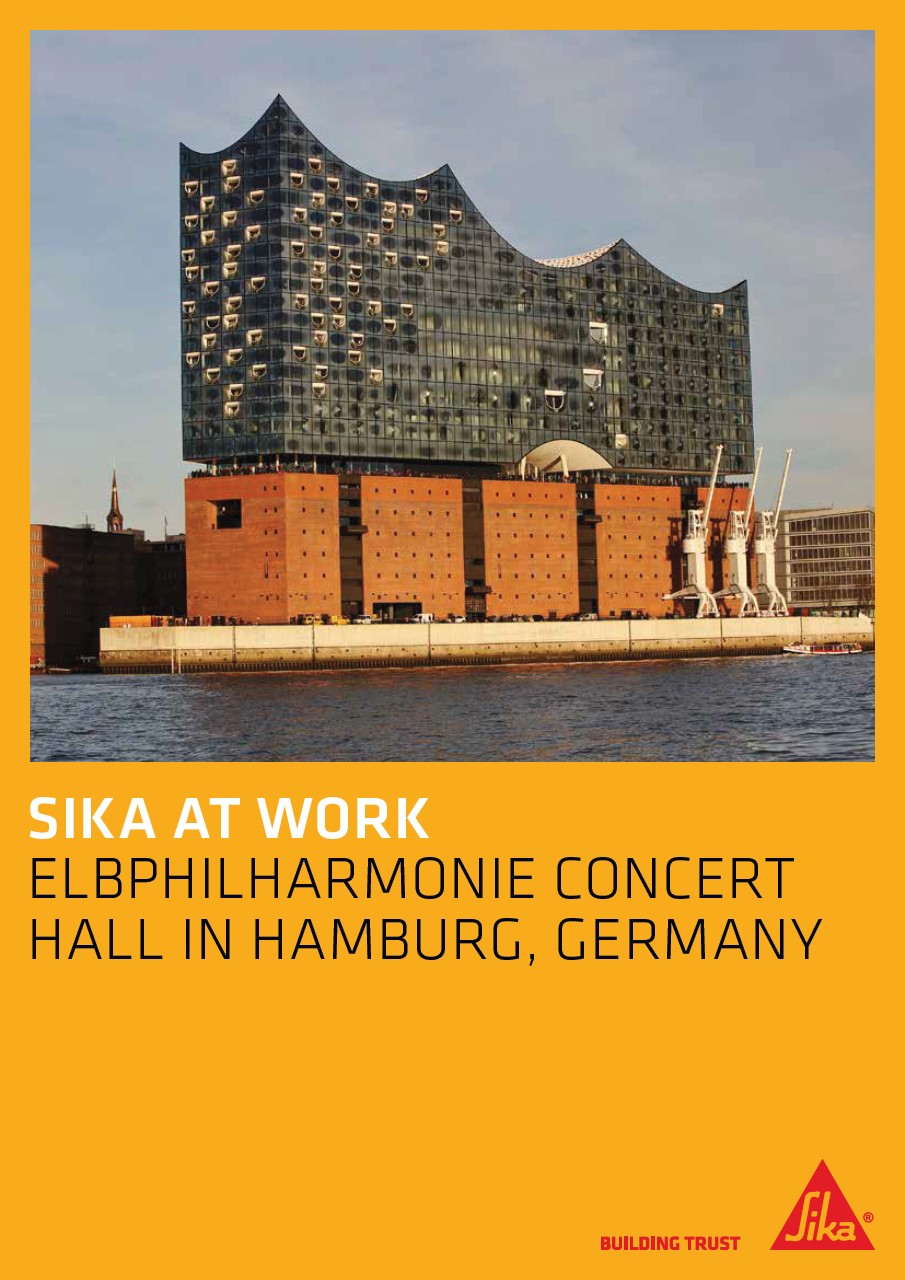